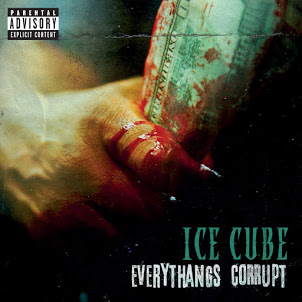 It is hard for an artist to top their previous work. I think Ice Cube has done that and still let his legacy shine. ‘Everythangs Corrupt’ is a great album. It has a lot of riffs but is still quite political and militant. I think that it can appeal to an older audience but could easily get younger listeners. Over the years I have heard a lot of Ice Cubes albums as one of my mates was right into his work. My favourite album was ‘Amerikkkas most wanted’ as it had Public Enemy on ‘Burn Hollywood burn’. This album is a classic already like a lot of his output. It really shows how far Ice Cube has pushed his art. Some tracks are more popular but they still have a great sound.

I have reservations about a lot of Hip Hop because I feel as though it can get shallow but Ice Cube can get beyond that. He may seem to be playing to a shallow outlook but he really opens things up and tells you to think. Ice T can do the same. He can create a riff and what seems to be a crime rhyme then leaves open questions in the lyrics which make you think. Ice Cube takes it even further openly criticising what we take for granted in day to day life. The fact that we almost expect to get scammed in the world we live in and confirms that that is how things are. It is good to see an artist be so truthful and powerful. You definitely won’t hear this album on popular radio.